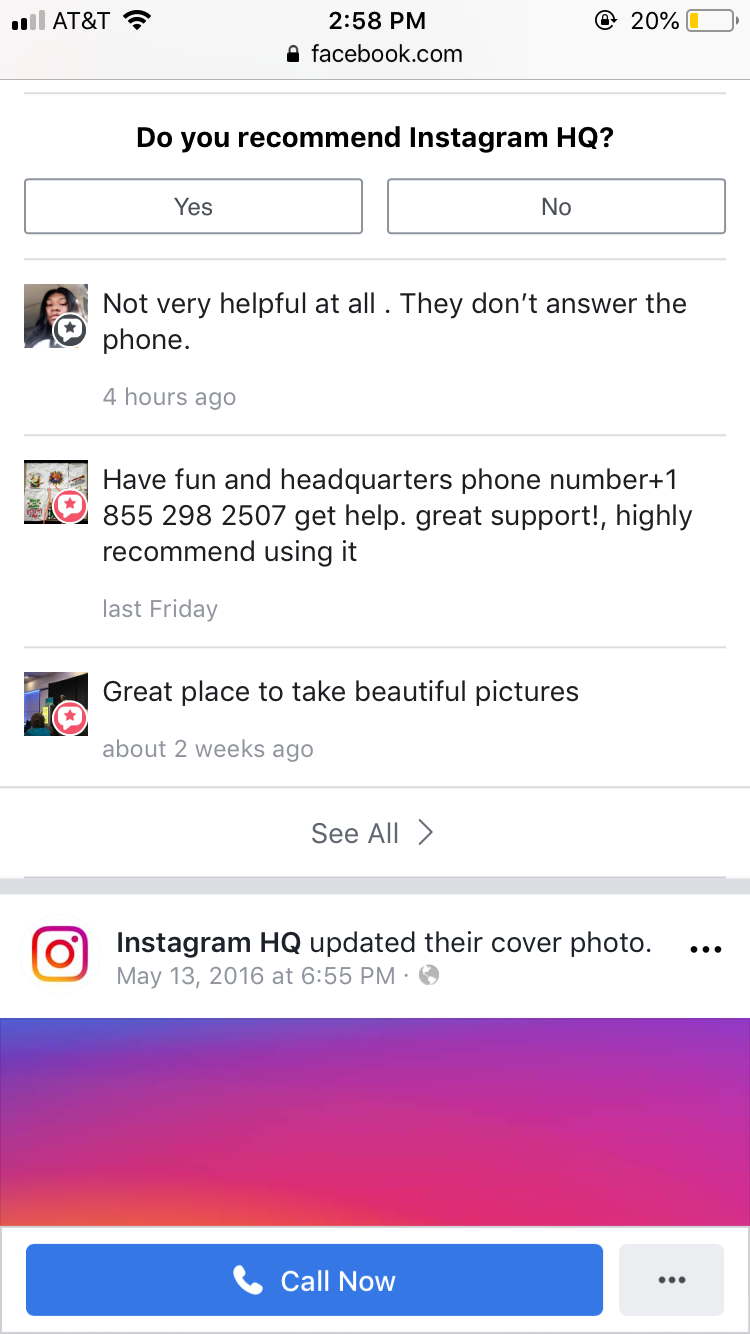 Anyone who’s ever had trouble with their Instagram account has undoubtedly attempted to get in touch with their customer support team and, much to their dismay, discovered that for an app that values interpersonal relationships, there is ironically no human-to-human customer service line.

It’s no secret that users have had to deal with impersonal and automated bots responding to their calls and emails every time they try to raise a concern to Facebook or Instagram’s Help center, so people have started to pursue more drastic methods.

If you’re one of the thousands of people that have tried to directly call the Instagram HQ in a desperate attempt to get their attention, join the club. I recently found myself in an Instagram-disabled-my-account-for-no-reason scenario, so I was momentarily captaining the hunt for the app’s customer service phone number on Google. After some digging, I found two numbers that were mentioned a lot in different chatrooms, threads, and forms.

One of which being: +1855 298 2507. To avoid confusion, let’s call this Number A.  Now, the thing about this specific number is that it constantly appears all over the Internet— from articles, to blog comments, and as a suggested alternative posted by users all over the official Instagram Facebook page.

Before calling it, I had the understanding that the official phone number linked to Instagram’s social media accounts only led you to an interactive voicemail. Here you see the number 650-543-4800, which we will refer to as Number B, in the legit Facebook page dedicated to the Instagram headquarters:

So when I found other users advocating for Number A and claiming that they received a lot of help after calling it, I was already a little suspicious. Why would Instagram make two separate numbers for their customer support service, but only have real people answer one of them? And why the number not officially endorsed anywhere?

I set these doubts aside for a while to investigate.

Calling Number A, it only took 2-3 rings before someone answered. A man with an Indian accent greeted me politely, saying I had reached “customer service”. What customer service exactly, he didn’t say, so I initiated by asking if this was for Instagram. He said yes after a pause.

I then began to explain my problem to him. I briefly described my situation— I reported an account for impersonating me, but Instagram disabled my account instead. I mentioned they had stolen photos, captions, geotags, and the profile picture from my account, and were likely trying to scam potential clients who recognized my face from other brand partnerships by pretending to be. I asked if he wanted me to spell out the usernames involved. He said yes, I did so, then he asked me to wait as he “checked the servers”.

A few seconds later, he confirmed that he’s located the account, and it indeed was disabled for impersonation. I almost believed his authority when he said he could confirm my account had been removed, but then I realized that 1.) anyone who searched my account could tell it was unavailable, and 2.) he just repeated the reason that I provided him with.

He then went on to explain that he was going to direct this case to the security team, as it was very serious and complicated. Because of the nature of its intensity, he said they might have to charge me to get it fixed. At this point, I knew something was up. No matter what, I knew that Instagram never directly solicits money from their users.

He told me he would now transfer my call to the tech team. Once the line shifted, a man named “Tom” with a British-American accent introduced himself, and the line cut instantly.

I was apprehensive to try again, but after a few hesitant dropped calls on my end, I finally went through and spoke to that “Tom” fellow. This is a rough transcript of our conversation.

Me: Hi, I called earlier about the false disabling of my account. I was told I’d be transferred to the tech team, but the line cut.

Tom: Well yeah this is the tech team, and you probably dropped the call or something, it happens all the time.

Me: Yeah, someone was impersonating me so I reported and blocked them. The next day, my Instagram— @frances.beltran— was disabled for “pretending to be someone else”. I tried emailing your customer support but didn’t get any response.

Tom: Yeah no you won’t get any help from there, they only respond to bigger issues. Okay, we can get you sorted. But we’re gonna need your full name, your phone number, and your house address. Then you’re going to need to make a Google Security account, and a Google Play gift account. All for verification purposes, of course.

The conversation speaks for itself. Without a doubt, whoever was running that fake Instagram helpline was a group of lowlife bums trying to scam people for Google Play gift cards.

Just to confirm my suspicions, I did some research on Number A and discovered that it was also linked to several other company’s “customer service” hotlines. So unless it was actually just an underpaid multi-network call center that accepted tips in the form of Google Play points, then that was definitely a bunch of scam artists.

A little more digging, and I came across a 2017 article exposing another fake Facebook “tech support” hotline that was already promptly investigated by the authorities. It seems that the Number A that I came across is yet another rookie team of scammers trying their luck at exploiting the desperation of Instagram and Facebook users in need of help, and this time, hoping to go by unnoticed by the company’s security force.

I know– desperate times call for desperate measures, but let’s all stay vigilant and aware when it comes to exposing our vulnerabilities to online personalities. Unless you are 100% certain that you are conversing with authorized personnel from legitimate and trustworthy companies, do not provide any important information. Luckily, I caught on their lies with only having given them my username and my email address, but had I turned a blind eye, I would have fallen prey to a much deeper and sinister scam.

Let’s hope that Facebook will find theses money-roaches soon and take them down before they can victimize any more people. As they work on this issue, I also hope they take better measures to assist their users, so people wouldn’t have to go off on a limb and risk their safety by contacting tipped-off numbers in hopes of getting even the slightest bit of reassurance that someone human is looking into their problems and personally trying to fix them.

I myself am a big supporter of Facebook and Instagram seeing as I drive most of the traffic for my business from there, so I will always advocate for their continuous improvement, since a lot of people count on them to secure their safety when their own vigilance has already been bypassed. I believe their team has the skill set to assist their users better, and I know with the right kind of constructive criticism and drive to develop, these wonderful platforms can continue to build trustworthy relationships with the people who patronize and support them.

We all just have to be willing to share our feedback while they listen.